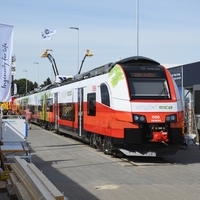 In italy the engine works for Mercitalia Rail.

Sep 7
@benf I believe that to be untrue. This locomotive is part of the series that has been hired to BLS, as the stickers say too. The Mercitalia/DB Cargo locomotives are the X4 E 702-710. The 711-717 are hired to BLS and work for Captrain Italia in Italy. Also, the Ambrogio trains seem to be hauled by BLS normally too, so I wouldn't know why that isn't the case here.

MRCE is not better because we use the operator on Trainspo, not the lease company.

@benf It is possible that this train runs under Mercitalia admission in Italy, but the loco would still be BLS since MRCE hires the loco to BLS. For example: BLS and Boxxpress run under IRP admission but the locos are still classed as BLS or Boxxpress.

@ddz7504 And so... the operator in italy is MERCITALIA RAIL! In Swiss BLS ecc ecc

Steven Oskam
Sep 7mobile
@benf loco operator, not the train operator. The loco is hired to BLS Cargo and nobody else.

Sep 7
@ddz7504 but a lot of loko are sub-hired from company to company... It's unpredictable!