Is this taken from Buckley Road?

ARHS C30T 3016
pic commentAug 24
Aug 24
It's a great photo deserving of the audience there. Congrats. I note you have the owner as 3801 Limited on RP but here it's ARHS. Is NSW Transport Museum connected to ARHS?

DR DJ 1221
pic commentMay 13
May 13
Thanks Keith. Yes I've notice the progress of votes on my photos sometimes. Generally it happens overnight due to the time zone here.

DR DJ 1221
pic commentMay 12
May 12
I'm just curious. How many are in the voting pool? Do they all have an Editor title? As you probably know I'm quite active on RailPictures.net (where there is some debate over many years about the photo screening.) How could trainspo be promoted in North America and down-under? There are maybe hundreds of past RP contributors who don't want to put in the work to get a flickr following.

DR DJ 1221
pic commentMay 12
May 12
Thanks. There's better locations than this along this spectacular line with viaducts and tunnels hewn from rock. Sadly, Dunedin Railways has closed and 51 jobs lost. There is hope that one day it will re-open for tourist trains if there's enough fundraising. Cruise ship tourists were the main patrons.
I'm intrigued by your "screen" name Maersk.146. I want to thank you for all your faves on my photos and letting them on here if you are one of the ones voting for them!

1431 was built by Clyde Engineering in NSW in 1957 for NZ Railways. It was sold to Steam Incorporated in 1988 and, after restoration, returned to mainline service in 2009. The annual Grand Circle excursion train is seen at Levin and ran to Woodville via Manawatu Gorge and then to Wellington via the Rimutaka tunnel. 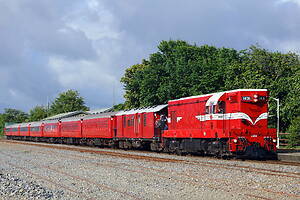 DTG DG 772
pic commentMay 11
May 11
G 772 was built by Vulcan entering service in 1956 and was bought by Diesel Traction Group (DTG) after being retired in 1983. 1102 was built by English Electric in Queensland in 1966 and bought by DTG in 1989. Restoration begun around 2009 and the recent certification for mainline running being celebrated by the special operated by Steam Incorporated. The train is seen passing under highway 1 at Crichton near Milton on the return trip from Invercargill. 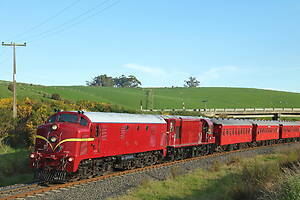 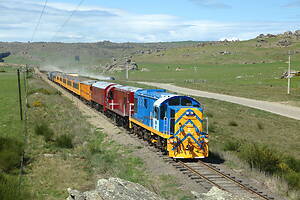