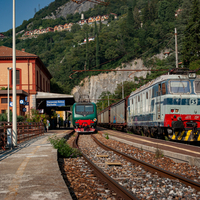 Federico Santagati
Jul 16, 2020
@Kempy72 The story of the ETR 250 and ETR 300 series starts in 1952, when the Italian Railways (FS) decided to build some luxury trains to integrate many of the ETR 220 built in 1939 and damaged during World War II. Two different train types were built: The ETR.300, a seven car long EMU built by Breda, nicknamed "Settebello" after the sign of admiration inspired by a famous card game, And the ETR250, a 4-car EMU with the same design of the ETR.300, but a little smaller, Nicknamed "Arlecchino" (eng: Harlequin) for the 4 different coulours of the furniture and seats of every coach (Blue-Green-Yellow-Red).
Due to the high production costs, the originally project to built 8 ETR.300 was reduced to 3 Trainsets (ETR.301, 302, 303). The ETR.250 was built in 4 trainsets. (ETR.251-254)

While the innovative exterior design of the train, inspired by the airplanes of that time, the interior design was very rich in each detail. The Interior designer was Giulio Minoletti, a very famous italian designer of the 50's that you can find still today in many italian products.
The most characteristic part of the train is the front, were the public could see for the first time the driver's view. The cab is located on the top of this boudoir.
For the first time also public telephones were installed in the train. That was a great novelty a that time.

Thanks to the great aerodynamics of the front, the large wheelbase of the bogies (3000mm) and the large installed power of 1800kW the train reached 160km/h very often between Milano Centrale and Roma Termini, connecting the two cities (Without any high speed line) in 5 hours and 45 minutes and with the maximum comfort of that time. In 1969 the DC-Motors has been changed with the T165 motors that increased the maxumum power to 2616kW and took the maximum speed of the train to 200km/h.

In the 70's the ETR.300 were used for the TEE Settebello services until 1984, were the trains were used as Rapid service trains between Milano, Firenze and Venezia and the well known Genova Sprint service between Genova and Roma.
The ETR250 were primarily used between Milano and Napoli, first as the "Freccia del Vesuvio"(Vesuvian Arrow) then as the Superrapid nonstop express Milano-Roma. Since 1975 the ETR250 were used in double traction with the ETR220 between Genova, Milano and Venezia.

In 1992 the ETR.300 were withdrawn from service: The ETR.301 was scrapped the same year in Santhià after a long procedure for the removal of asbestos. The ETR.303 was Scrapped in 1998. The ETR.302 Was chosen in the mid-80's for a big overhaul to adapt the trainset for Intercity or Charter services. Most of the luxurious interior furniture was removed and substituted with normal seats, but the furnitur was preserved in a freight car in the Bologna workshop, probably thanks to some clever railfan who worked there. Sadly the furniture was demolished afterwards. The ETR.302 was used for Charter service until 2004 and then withdrawn and abandoned in Ancona until 2007, then transfered to Falconara Marittima and at least to the Voghera Coach Workshop in 2016. On June 3rd 2020 the Trainset has been transfered to the Porrena Rail Workshop for a complete restoration by Fondazione FS, the Heritage company of the FS. The Furniture will be rebuilt after the designs of Giulio Minoletti.

The ETR.250 were all withdrawn in the first 90's too, but used for charter services until 1998. Between '98 and '99 all trainsets were scrapped, except the ETR.252 you can see in the picture. This trainset was abandoned in Cancello Arnone and transfered for restoration in 2009 to the Santhià workshops. In 2016 the trainset were finally restored by the workshop in Porrena, and, after the installation of the italian safety systems, presented to the public in Roma on june 27th, 2019.
The idea of Fondazione FS is to revive those units for historic and touristic services in the country, since all the other Heritage trains were so popular in italy.
I am glad to see this very unique trainset on the rails and hope to see the ETR.302 back on track soon.
B
bfsSwiss
Jul 16, 2020

@Taurus717
Thanks for your very interesting and detailed explanation.